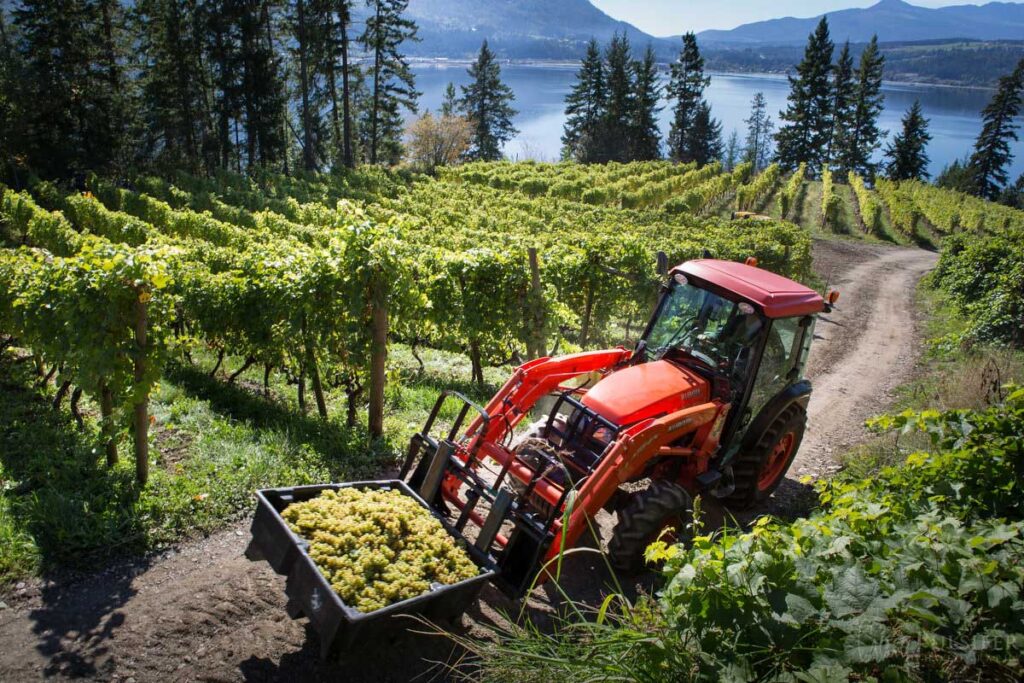 We called only looking for a space heater, all part of a decision to downsize.  The voice on the other end of the line sounded slurred but confident, female but ageless.  She was selling an oil space heater and it seemed like a good deal.
My wife, Lib, got the address and together we drove to a crumbling trailer park where we were welcomed in by a squat, baggy-looking woman.  There was no art on the walls, no TV in the living room, but a 50¢ lighter and inhaler lay on the coffee table beside an ashtray half full of butts.  She’d hit hard times, but was as kind as could be.  Before selling us the heater at $5 off her asking price, she offered that we join her the following week at a local vineyard to make beaucoup dollars picking grapes.
Beaucoup dollars… I liked the sound of that.  Truth is, our decision to downsize is a thing of necessity.  Seems father did know best.  The artist’s life is no path to riches.

Picking’ and Grinning
The following Tuesday was pure autumn; no frost, yet cold colourful leaves waved us toward Ashby Point Vineyard on the south slope of Bastion Mountain where farmer Jim Wright was clearly glad to see more pickers.
“Grab a bucket, here’s your shears… 7 cents/pound and there’s bins at the middle and end of all the long rows,” he said grinning.  “Are you working together or a row each?”
“Together,” I said, banking on Lib’s patience to pick and my strength to haul buckets to bins.
Being rookies, Jim took an extra few minutes to teach us a few things: (1) the trick to highballing is to keep the bucket under your work and your eyes on the vine to look for the next bunch to cut,  (2) cut stems tight to the vine, (3) leave the unripe, but don’t worry about the raisins, (4) the steady blast of shotgun shells exploding all around us is to keep birds away from the grapes.  Nevermind all the bear shit on the ground, there is no correlation.

Ortega y Gasset: I and my circumstance

On a good day, the whole process can be entirely meditative, filling bucket upon bucket of ripe, juicy fruit…honest labour… in the quiet cool of autumn… drawing the greatest good… from orderly rows of greenness… for some future vintage…in the years to come.  Breath in, breath out…never mind the shotguns.
I wish I had known more about the variety of grapes at the outset.  Ortega is a Teutonic hybrid named after the Spanish philosopher/poet José Ortega y Gasset (1883-1955), who was raised in Madrid by a wealthy newspaper family and schooled by Jesuits.  In 1910, Ortega y Gasset became professor of Metaphysics at Complutense University of Madrid, gaining international fame with an essay, called ‘The Revolt of the Masses’.

Ortega’s core philosophy is itself a hybrid of idealism (centred around the ego) and ancient-medieval realism (where reality is found outside of self).  He later distilled this to say, “Yo soy yo y mi circunstancia” (“I am I and my circumstance”), meaning that life is a drama that exists between necessity and freedom.1

Clearly, this would be well worth a few grapes later to consider.

At the end of day two, we learned a valuable lesson about circumstances when Lib let slip with the shears to clip her finger nicely and knowing not to mix reds with the whites, we decided to call it a day.

Back at the house, we washed what turned out to be a minor wound and plugged our little oil heater in with satisfaction.  It’d been a good couple days.  We’d made some new friends, got some great exercise, learned a fair bit about harvest and even earned a few bucks that ideally will go toward some new winter tires to help us keep a grip on this drama of necessity and freedom unfolding around us.