My Date with Gimli

Got a call from the local Film Commissioner looking to house a Yeti.

“A Yeti… Y-E-T-I… you know, an Abominable Snowman, albino Sasquatch… I need to find a cave big enough to shoot a movie in,” he said in a tone that somehow managed to make me feel stupid for asking.

“There’s a guy down at the border who says he knows of a place.” 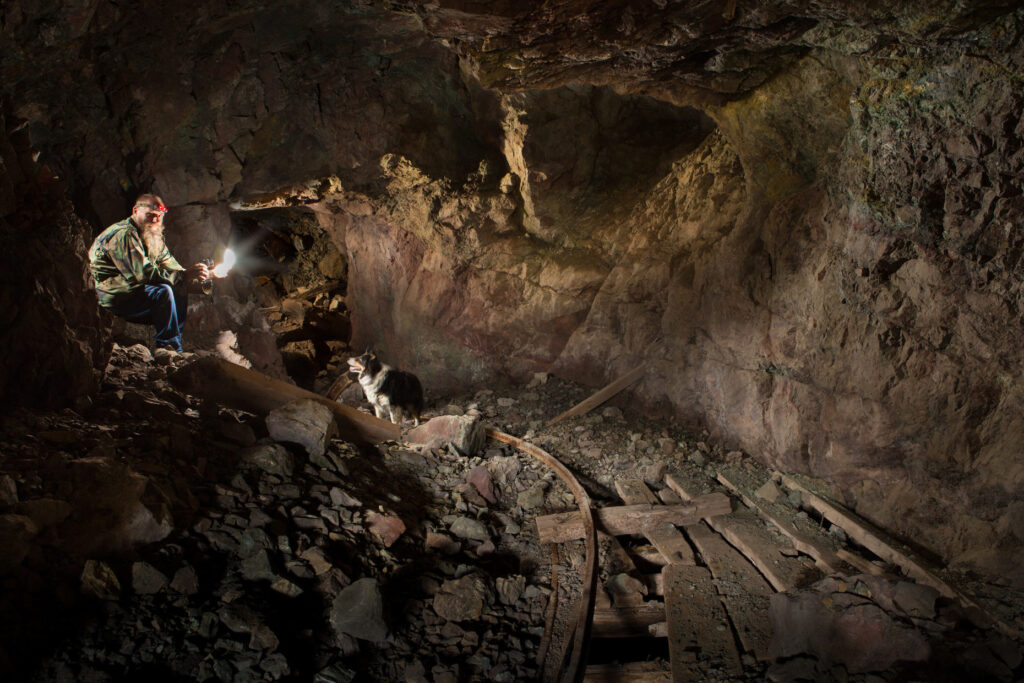 Greenwood, British Columbia – location scouting for the OK film commission of the Phoenix Mine east of Greenwood, BC

Pulling gigs as a standby location scout has it’s advantages (and it’s disadvantages).  The great thing is that you get to see some amazing parts of the world on somebody else’s dime.  The downside is that gigs are infrequent, they come on short notice, and are notoriously vague.

The Commissioner has given me a name and a number.  I call, but hit voicemail with a bullish voice: “You’ve reached Frank Schlichting, you know what to do…”

I leave a message thinking I’ll never hear from him again, but lo and behold, I get called back within the hour.  We arrange to meet at the Copper Eagle in Greenwood, just west of a century-old mine that has long since been abandoned.

The next morning, I rise at 5:10am for the drive south and roll in just as the shop is opening.  A rugged fellow, looking much like Gimli from Lord of the Rings, sits with his back to a wall.  He spies my camera and cocks his head to say, “Over here.”

The casting department should look no further for their Yeti.
Frank Schlichting is a hulking man, close to 6’3″ tall, in his late 50’s.  The hair on his chin more than compensates for his loss atop, which creates a viking-like aura that makes me wonder what I got myself into.

“Come on, we’re burning daylight,” says Frank, so we grab coffees to go and jump into his truck, together with his dog, a mangy mix of mostly collie.

After 15 kilometres of switchbacks into the hills, Frank pulls over and jumps out.

Grave markers from the mine’s heydays now lay fading and falling over – a town now populated by ghosts of the past.

“You gotta see this,” says he, disappearing over the bank into a century-old graveyard.  The history of Phoenix, now a ghost town, is written on weathered stone and rotting wood grave markers that fill the place.  The headstones speak of young men and babies; the former taken by the mine, the latter by disease. Life was hard back then.

Just up from the cemetery, is the Rawhide mine; a catacomb of collapsing tunnels that once sustained a town of 2000 people in the late 1890’s.  My guide wastes no time scrambling over mine tailings, occasionally warning me not to step to the right or left, lest I plunge down an unmarked shaft. 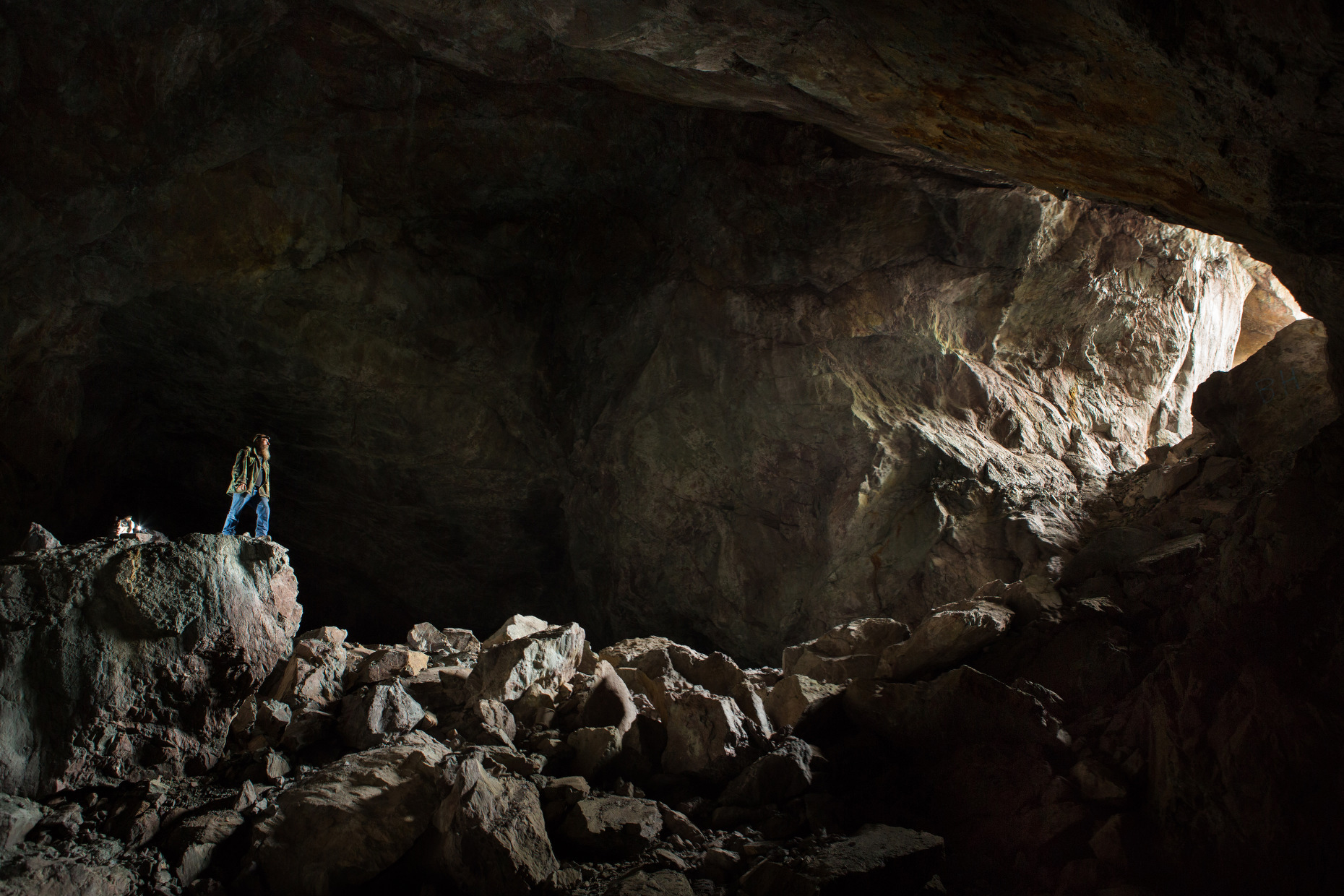 Frank leads me into the crumbling bowels of the BR shaft and waits patiently while I rig strobes to illuminate the massive interior.  As light fills the room, I am struck by just how precarious life must have been for those brave souls who risked everything to chase veins of copper ore in the concerted hope of honest gain.  Those surely were different times, but today, scrambling over and around fallen slabs of cave wall, I feel a connection.

As we wrap up the shoot, Frank asks how much my camera gear is worth.  I’m slow to answer knowing that I’m deep underground with a complete stranger.  And at that very moment, a thunderous boom fills the room and dark clouds outside let go with a deluge of rain.

“Shortcut?” I ask, with growing unease.

“Yeah, we can just cut through the mountain,” he says, whistling for the dog to follow.  And then he disappears into one of the dark shafts off the room.

“You coming?” His voice echoes from well back in the darkness. 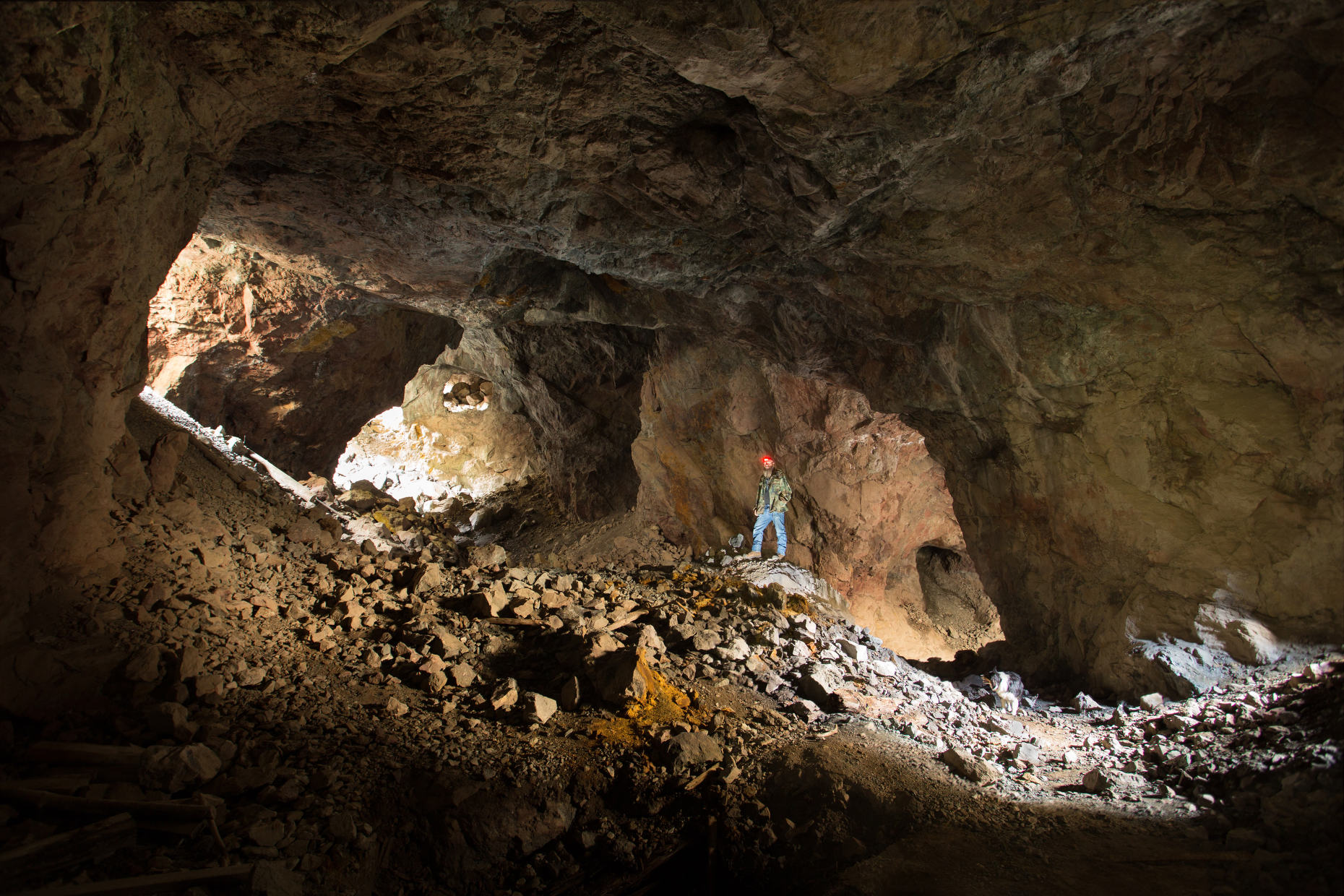 Frank leads the way through a large antechamber or stope where several shafts converge.

Fifteen minutes along a narrow shaft, we are walking along the rotten ore car rails and come upon a cave in.  Our way seems blocked.

“You may not fit with your camera gear,” says Frank as he wiggles through a small hole in the rubble. “Pass me your bag once I get through.”

Now I’m getting nervous, but am none-too-keen on backtracking through the labyrinth, so I dutifully shove tripod and bag through to him.  When I am halfway through myself, I hear his muffled voice, “Don’t touch the rocks above you, they may come down.”

Sheesh, now there’s a comfort!  I waste no time squeezing past the rockfall and am relieved to find Frank, his dog, and my gear waiting for me on the other side.

It’s cold and black here and the footing is slick.  I turn my headlamp to the walls and floor and am amazed to find the passageway filled with ice, like a freezer that needs defrosting.  An old mine car lies abandoned up ahead.

“Welcome to the Ice Palace,” hollers Frank, as proud as a kid in his very own clubhouse.  “You want to check out this side shaft?  I’ve been wanting to see where it goes.” 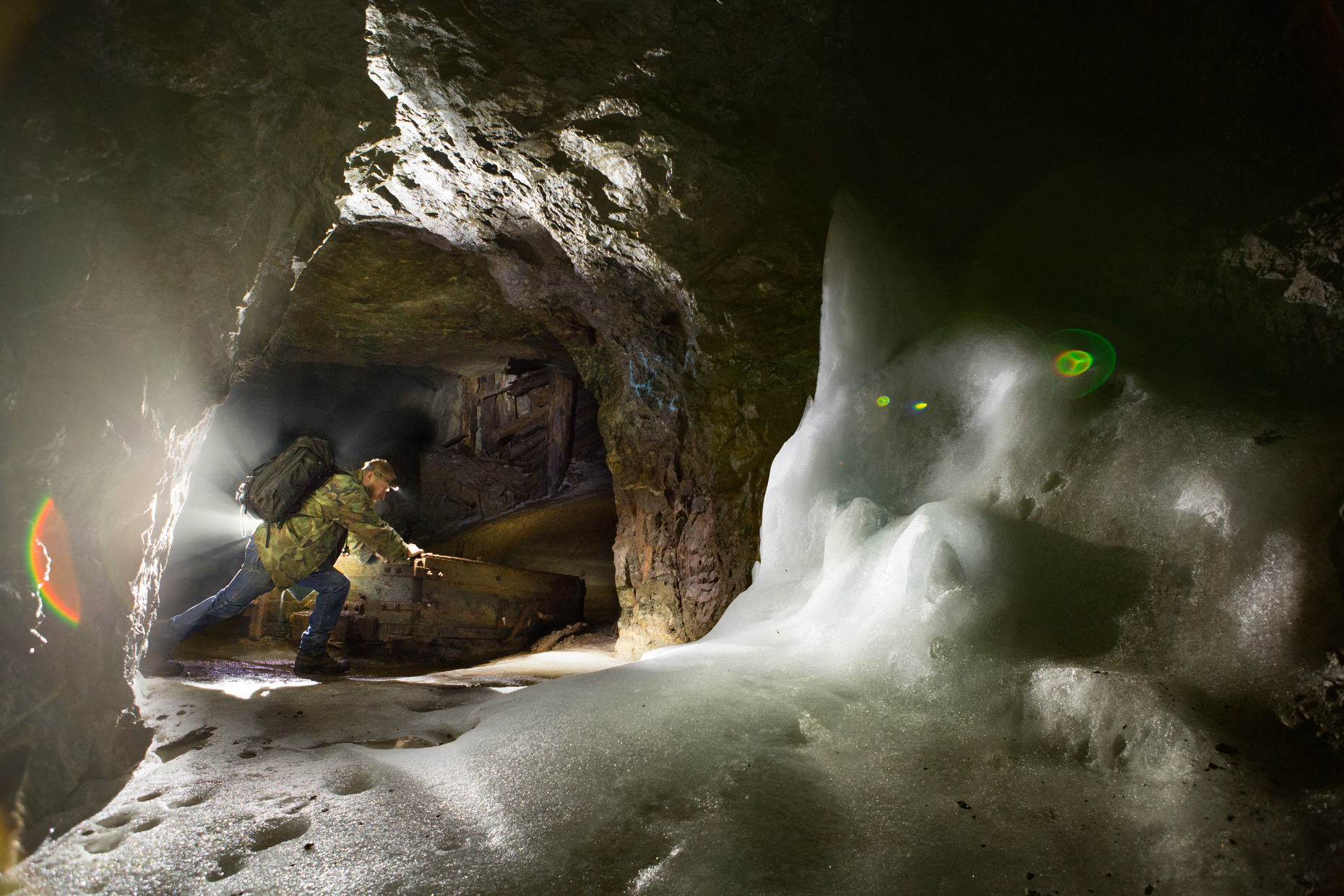 I’ll admit, at this point I’m a little bit curious, but I’ve lost track of time and don’t want to tempt fate; so instead, we make tracks for the surface – and I’m thoroughly relieved to once again see daylight.

Back at the truck, the rain has stopped and Frank is already planning his next tour of spelunking.

“Yeah, we should head north to another site I know of…” he mutters.

“Uh, yeah,” I say trying to sound enthusiastic.  “I’ll give you a call about that later.”

But as fate would have it, I seem to have misplaced his number.

Great to see some from Greenwood, my grandfather was born there.

Well then that would be like me complaining my twin brother was ugly!

Haha, not sure what that says about my storytelling Frank, but I’ll note that it’s your mug in most of the photos up there. 😉

You are as talented as a storyteller as you are a photographer!